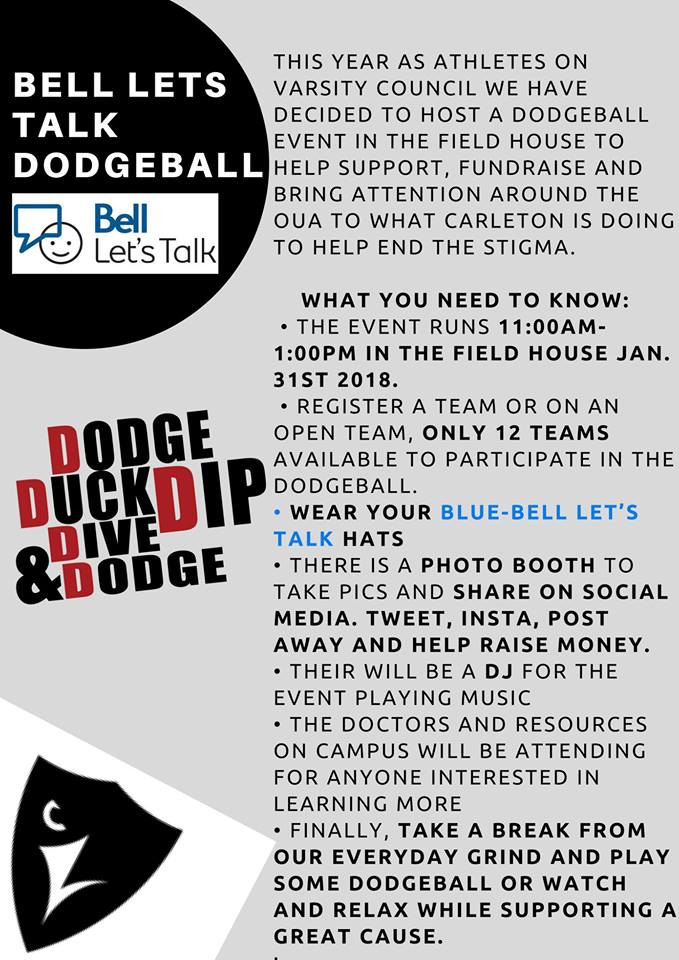 Former Ravens men’s soccer player, Andrew Latty, joined Drs. Lindsay Bradley and Taryn Taylor of the Carleton Sports Medicine Clinic as they first campaigned for the program in 2013. Carleton’s Department of Athletics joined in to help kick off this fall’s launch, which syncs with Carleton’s Thrive Week (Oct. 3 to 7) as the first week of Healthy Workplace Month.

One of the biggest barriers regarding mental health issues is the idea that an invisible injury is less serious than a broken ankle or dislocated shoulder. Bones mend and athletes get back on the pitch but depression, on the other hand, takes much longer to heal. BtB will shed light on these issues by publishing several personal accounts from Ravens athletes on their website throughout October.

One such story is about third-year criminology student-athlete Jackie Pearson, who suffered two concussions while she played and trained for the women’s rugby team in 2014 and 2015. Though the blows didn’t feel very hard, Pearson had trouble sleeping and eating for many weeks, even feeling nauseous when she ran.

“I couldn’t sleep. Every single night I’d wake up at 3 a.m.,” she said. “I felt irritated all the time because I wasn’t well-rested but if I had to name the number one symptom it would be anxiety.”

During the following fall training, she suffered a third concussion and has since had to stop playing. She is registered at the Paul Menton Centre for Students with Disabilities (PMC) that helps post-concussion students with concentration and time management support as well as academic accommodation.

“On the outside, everything will be fine. You’ll be doing the right things. But as soon as you sit down by yourself, negative thoughts and symptoms can set in.”

For student-athletes trying to be at their best, the pressure of performance and the perception that they live ideal lives can make it very difficult to discuss mental issues, even with coaches or teammates.

“The stigma associated with mental health makes is hard for anyone to reach out,” said Dr. Taylor, one of the campaign’s co-founders. “The hardest part is taking that first step.”

Latty emphasized that the student body should also be aware of a long list of mental health resources that are available on campus for students and student-athletes. There are several associations and organizations offering support to all undergraduate and graduate students.

In addition to the awareness campaign, BtB will raise funds at varsity games throughout the month to help the Ravens student-athlete medical emergency fund. Unexpected medical costs for Carleton student-athletes that aren’t covered by OHIP can be offset by this fund.

Information cards asking for small donations will take place at the Panda Game as well as the women’s rugby game against Concordia on Raven Road Field on Sunday, Oct. 2, and at the men’s hockey game against Toronto on Saturday, Oct. 29.